Check out this upcoming event that came across my desk!!

As part of the Afrofuturism Festival at Carnegie Hall and the Women in Comics Collective International presents: “The Comic Book Spectrum: Race, Gender, and Comics” on February 26th, 2022 at 1:30 pm.

This panel discussion is part of a series that focuses on the effect that race and gender representation have on the comic book industry. It also serves as a platform where multimedia professionals can talk about their backgrounds, work, and thoughts related to the ever-changing spectrum that is comics.

**Take a journey to the world of Afrofuturism—an ever-expansive aesthetic and practice—where music, visual arts, science fiction, and technology intersect to imagine alternate realities and a liberated future viewed through the lens of Black cultures. Immerse yourself in Afrofuturism, Carnegie Hall’s 2022 citywide festival.**

As one month gets ready to come to a close another one begins!! And with a new month comes a new set of trailers! Check them out below:

The Contractor (In theaters April 1st)

On this past Saturday afternoon, I had the opportunity to participate in some real life “Black Girl Magic”!! As part of the “Black Feminist Future Series” put on by the Schomburg Center for Research in Black Culture, myself and four other AMAZING Black Afrofuturist women (Susana Morris , Tiffany E. Barber, Esther L. Jones, and Kinitra D. Brooks [moderator]) took part in a very fulfilling conversation about Black women and theories of the future!!

Nothing like sharing the “virtual” stage with a group of brilliant minds such as these Black women!! My mind, body, and soul were overflowing with Black joy and hope!!

Check it out below:

For more upcoming “Black Feminist Futures” events at the Schomburg check out the following link here!!

To All My Chefs & Mixologists (novice and professional) out there, this is for you!

Who doesn’t love a mouth-watering, soulful meal or a delightful spirit to cap off the night?!! Well I wanted to add to your “must-see and must-try” lists by highlighting the spirit and culinary world with a few cookbooks, wineries, breweries, creators and organizations that are making Black History!!

Not surprisingly, Black Americans have contributed significantly (and still do) to the culinary world and cocktail/wine/brewery culture. We have been tastemakers and drink-makers since the beginning of time :-). Cooking and feeding the soul is in the DNA of African Americans (check out Netflix’s High on the Hog: How African American Cuisine Transformed America if you don’t believe me)!

As it relates to the spirit world, I recently learned that there was a Black Mixology Club that was founded in 1898 by R. R. Bowie and J. Burke Edelin that was a “marquee professional association,” and a gathering place for African Americans who were trying to move up the ladder of social mobility within professional bartending [Check out these pioneers as well: Cato Alexander, John Dabney, Tom Bullock, and Dick “Uncle Dick” Francis].

Now let me say this…. the following below is by no means the only folks that have been and are in the game just a few to wet your palette (literally and figuratively), because I know there are tons of Black folks making history!!

So get ready to pop some bottles, plan your next couple or friends getaway, pull out those pots and pans, turn on your ovens, and make some magical memories!!

Recipe, Cocktails, and other Cookbooks

So recently I have had many people ask what would I recommend as an introduction into Afrofuturism. This is something that I am always talking about, teaching, and or even consuming for myself, so why not have a list for beginners! And voila…I compiled various books, short stories, comic books, graphic novels, children and YA fiction, and movies that offer a unique look into Afrofuturism. 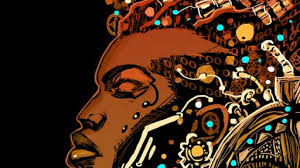 Yesterday morning I had the pleasure of lending my thoughts to this discussion on “Hollywood’s History of Portraying African Americans” with Black Press USA TV !!

Shout out to my amazing co-panelists Peter Bailey and Dr. David Childs!!

Check it out below:

“We write for the same reason that we walk, talk, climb mountains or swim the oceans – because we can. We have some impulse within us that makes us want to explain ourselves to other human beings.” – Maya Angelou

Every month I always look forward to feature books for my followers, family, and friends to read. I am always on the lookout for books to add to my monthly lists, so much so that I had to create a file just for “Book Features”. Well this month is no different!! I found some goodies that I hope you will like and feel free to share with others!!

Check them out below:

As an added bonus this month, not only do you get February’s recommendation but also a special list just for #BlackHistoryMonth!!

And remember you can always go back and check out the previous month’s list and past recommendations in the “Resource” section of the website!!

“Books are meat and medicine and flame and flight and flower,
steel, stitch, and cloud and clout, and drumbeats in the air.”

SAVE THE DATE and MARK YOUR CALENDARS!!

Gotta love when you get to see history played out on the screen!! Considering what is and is not being taught in schools today and the resistance with CRT, it is refreshing to to see other outlets of learning! Which makes me happy to see what HBO is doing this year for Black History month!! This February, HBO documentary presents Frederick Douglass: In Five Speeches where it will bring to life the words of one of our country’s most famous anti-slavery activists. It will feature the great talent of Nicole Beharie (Scenes from a Marriage), Colman Domingo (Euphoria), Jonathan Majors (Lovecraft Country), Denzel Whitaker (The Great Debaters) and Jeffrey Wright (Westworld) as they each draw from five of Douglass’ legendary speeches. The documentary will also feature narration of Douglass’ autobiographies by André Holland.

The five featured speeches are:

“I Have Come To Tell You Something About Slavery” (1841) performed by Denzel Whitaker. At an anti-slavery convention, Douglass recounts his story of being raised as a slave publicly for the first time.

“Country, Conscience, And The Anti-Slavery Cause” (1847) performed by Jonathan Majors. Douglass addresses the American Anti-Slavery Society on his return from the British Isles which he found to be more accepting and equitable than his own country.

“What, To The Slave, Is The Fourth Of July?” (1852) performed by Nicole Beharie. Douglass reminds his audience of the continuing enslavement of his people, 76 years after the signing of the Declaration of Independence.

“The Proclamation And A Negro Army” (1863) performed by Colman Domingo. Douglass responds to the Emancipation Proclamation and calls for the Black man to be allowed to fight in the war.

“Lessons Of The Hour” (1894) performed by Jeffrey Wright. Douglass urges America to eliminate prejudice and look to its founding principles.

Frederick Douglass: In Five Speeches premieres on February 23rd at 9 pm/ET on HBO and HBO Max!!

Many of these trailers were featured on Sunday during Super Bowl LVI, but just in case you need a reminder…

Check out these jaw-dropping trailers below:

The Lord of the Rings: The Rings of Power (Streaming on Amazon Prime September 2nd)

Missed last week’s Season 2 premiere of Conversations with Beloved & Kindred?? Fear not I got you covered!!

Check out our first episode where Dr. Robinson and I jump in feet first to discuss the films Horror Noire: A Black History of Black Horror (2019) and Ganja & Hess (1973)

Tune into our discussion below:

And as a little bonus check out these post-episode resources: